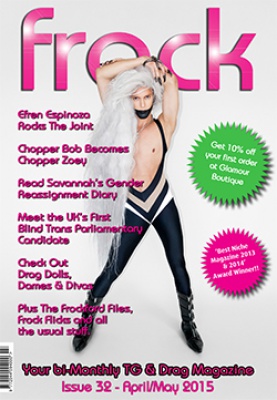 Woooh! It’s time to get into your new Frock! We've a bumper bundle of trans and drag goodies for you in our 86 pages this time. Musician, Efren Espinoza adorns our cover and several pages inside too. He is a rising star so we’re very happy to have him in this Frock.

Katie talks to Chopper Zoey, a TV News Reporter and helicopter pilot from Los Angeles who used to be very well known as Chopper Bob. She explains what it’s like when you have to come out not only to friends and family, but to your TV audience as well!

We tell you about a new TV series from Discover Life which follows a group of transgender friends as they come to grips with living their lives as females. It’s sure to be a huge hit so just remember where you heard about it first!

James Hicks is a drag photographer extraordinaire! His images of well-known drag queens in all their finery are a real spectacle. Now he’s put many of them together in a coffee table book called Drag Dolls, Dame and Divas and we get a sneaky preview!

What is it about the ‘T’ word that makes people cross. It used to be just an innocent little word but in recent years it’s become toxic. How could that have happened? We ran a survey to find out.

Savannah Jackson from Sydney, Australia has just had her GRS in Thailand and luckily for us, she took pics and kept a surgery diary too, which makes fascinating reading. We also hear about the recent Keystone Conference in Pennsylvania and Gerri talks to the director of the trans movie, Shunned!

We've hidden a Scottish Haggis in among the pages. If you find it first you’ll get a $50 Gift Voucher from The Breastform Store. And don’t forget you can also get 10% off your order at Glamour Boutique (details inside)!

There’s heaps more too in this busting at the seams issue of Frock Magazine, your portal to another world!