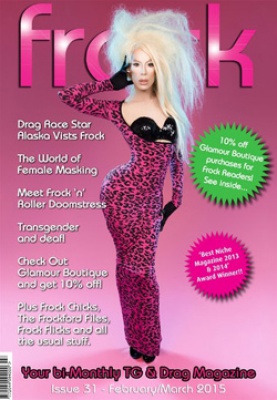 Don't miss your Frocky Dreadful for February and March 2015. It's a bit late but worth the wait. Drag Race star, Alaska is on the cover and she's also featured inside at our Frock cover shoot in LA. We have a piece on the strange world of female masking which sounds odd but is in fact a very practical way for people who have trouble passing, to look the part. Texan Trans rock musician, Doomstress, stopped by Frock Towers to tell us about her unique lifestyle and our Frock Chick in this issue is Virginia Honey, Kimberly Moore who also has a message for the military!

'A Profile of Transgender Courage' tells the story of a young deaf trans girl from Russia who has to fight public opinion to finally become who she really is. We have transgender related book and movie reviews, another female voice coaching session, cartoons, regular columnists, The Frockford Files and heaps more to keep you glued to the screen.