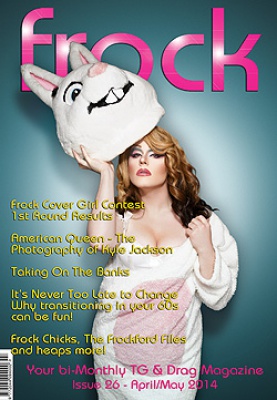 Welcome to the 115 page issue of Frock Magazine for April/May 2014.

We have an interview with Brielle Harrison from Facebook who is in the team responsible for them now offering over 50 different gender options on your profile (instead of just male or female). Brielle is also a transgender lady herself! And we'll tell you how you can change your gender on Facebook to one of the new options.

We take a good look at the work of up and coming drag photographer Kyle Jackson, who has also provided our Easter Bunny inspired cover!

The Great 2014 Frock Cover Girl Contest continues with the results of the first round, voted for by our readers. The ten finalists will now be handed over to our five judges for the final round and the winners will be announced in the June issue. The overall winner will appear on the cover in August.

Frocking All Over The World visits Cairo, Egypt, where being transgender is not nearly as easy as it is in many western countries.

In MindFrock, our psychologist, Amanda, looks at depression and suggests some ways to lessen its effects.

Ken Schneck is the host of 'This Show is So Gay', a radio show out of Vermont that's syndicated right across America. Your editor, Katie, was thrilled to recently appear as a guest on said show and here, she repays the compliment by putting Ken into Frock Magazine.

In 'Don't Bank On An Easy Name Change', Deirdre O’Byrne from Dublin, Ireland, tells us how she won an equality case against Allied Irish Banks over her change of name.

We also have all of our usual columns, features and other departments, like Frock Chicks, The Frockford Files, Frock Books and our movie review, Frock Flicks, which this time looks at the Oscar winning box office hit, 'Dallas Buyer's Club'.

And we have included Suddenly Fem's new Spring Catalog!

There's a lot more too in this bumper issue. So what are you waiting for? Dive into your Frock now!