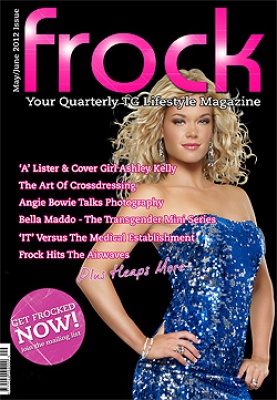 Welcome to the May/June 2012 issue of your favorite transgender people bi-monthly - Frock Magazine!  Katie, your Frocky editor girl, has been mixing with the stars recently, to bring you some riveting features.

Living legend and Frock's resident roving reporter, Angie Bowie, has been up close and in depth with an up and coming TG photographer called Jose, who takes some amazing pictures of Trans ladies. Remember that great Frock cover last year, featuring Heklina from San Francisco's TrannyShack? Well that was taken by Jose.  That's how good he is!  Just a kid and taking Frock cover photos already!

Logo TV presenter, Ashley Kelly, is our cover girl for this issue and, other than living legend and Frock reporter Angie Bowie, she's the first non-trans female ever to grace our front page!  I think you'll agree that she's quite a stunner and something for us MtF girls to aspire to.

So as not to leave the MtF boys out, we have an interesting article by a guy who is currently transitioning and needs to know more about what it's like to be a man.  Personally, I much prefer being female, but each to their own...

A new movie called Musical Chairs has recently hit the theaters and stars Laverne Cox, a Trans actress who is really Transgender!  Another milestone reached!  Katie gets to talk to Laverne and the director and if that isn't enough, there's also a piece in this issue, about a new TV mini-series called Bella Maddo, in which every member of the cast is Trans!  Yes, every one, including all the extras and even the cat!  Okay, not the cat.

There's all of our regular columns and departments and heaps more too in Frock issue #15!