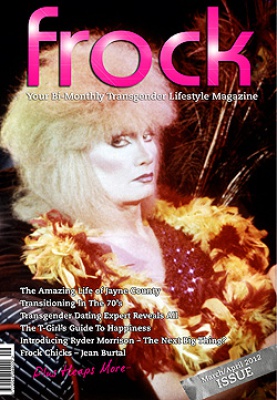 Welcome to the 88 page, March/April 2012 issue of your favorite Transgender focused bi-monthly - Frock Magazine! It's actually quite difficult producing a quality glossy periodical for you every two months but we don't mind because we love all things Transgender. If we weren't gainfully employed by Frock we'd be working as drag queens somewhere.

We are lucky to be able to count living legend, Angie Bowie, among our colleagues here, because of course, she is Frock's resident roving reporter.  In this issue she has roved over to Jayne County's house in Dallas, Georgia. What do you mean, "Who's Jayne County"?  Next you'll be asking who Andy Warhol was!  Go read the article and then you'll know.

And from a Trans person who was huge in the 1970's to one who we reckon might be big in the future. Just remember where you heard of Ryder Morrison first.

Frock's Tina Thompson, talks to the author of the T-Girl Dating Guide and April Donoghue comes up with a great way to explain what being Trans is like to any genetic women out there who are not entirely sure if it's not just a bit of fun.

California Girl, Sarah Luiz tells us about her Trans life and Carol Steele from the UK, remembers what it was like transitioning in the 70's, while New Yorker, Jean Burtal is this issue's Frock Chick!

There's all of our regular columns and departments and heaps more too in Frock issue #14!