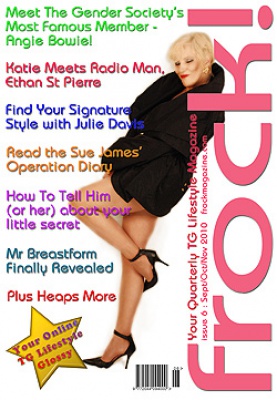 That's one of Frock's good friends on the cover - Angie Bowie. She's been a Frock fan since as long as we can remember so we've written a big feature on her in this issue to show we're her fans too!  Editor girl Katie, meets Transgender radio personality Ethan St Pierre,we reveal the man behind the most successful breastform shop in the world (hey, you probably have some of his forms) and Sue James gives us a blow by blow account of the countdown to her gender reassignment surgery and the aftermath too. Plus all the regulars and heaps more too!