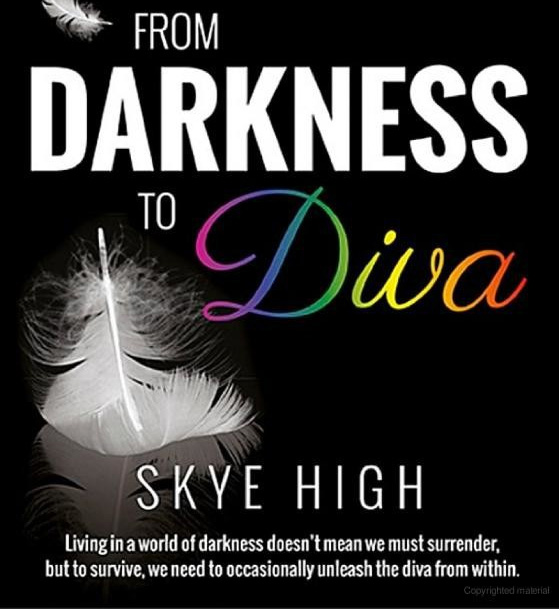 From Darkness to Diva 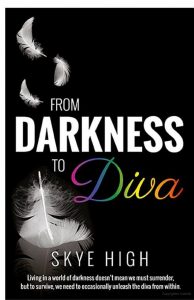 “She is simply an extension of myself, the boy who lives under the make-up. She is a genuine, 100% true representation of who I am and all I stand for.”

Standing over seven feet tall (in high heels), the aptly named Skye High is one of Australia’s leading drag queen media personalities. Her memoir, From Darkness to Diva, hit the shelves last year, adding an exciting new chapter to what is already a storied life.

It is a story that peers behind the glitter and the sequins, strips away the pomp and pageantry, and takes a very human look at the universal struggle against rejection and insecurity. Yes, it is partially a story about a drag queen, but the grand debut of Skye High upon the stage doesn’t even happen until halfway through the book, and she really only gets a handful of chapters. Leading up to that we find an inspirational tale of coming to grips and finding self-acceptance as a gay man, but even that is only part of the story.

More than anything, it is a story about being human. As Sky says early on in the book:

“I am someone’s son, someone’s best friend, someone’s partner or someone who you may perhaps meet on the street one day, extending his hand to you when you need it the most, without judgment or hatred . . . Every other aspect of my personality and sexuality is just an added bonus to make up the generous and loving person I am.”

Written in a very easy, free-flowing style, From Darkness to Diva is a powerful story that invites us in, makes an instant connection, and encourages us to find something of ourselves in Skye’s story. It cannot be easy to share such a deeply personal story, much less to be so honest about the struggles and self-doubts behind it, but it is heart-warming to see an overweight, short, slightly effeminate boy find his place in the world.

It is because we are allowed such intimate access to the private pain of a young recluse who played alone and ate lunch with pretend friends that we can truly appreciate the public acceptance of leading drag (and media) queen. We beat witness to a child whose spirit has been crushed, but who never completely gives up hope. Lest you think this is just another memoir about sadness and salvation, however, there is an edge to it.

One of the chapters that resonated most deeply with me was that of a young boy finding a hidden vardenafil without prescription strength within himself, turning the tables on his bully, and nearly choking him to death. It all started with the disgusting question, “How’s the filthy faggot today?” and ended with the proud declaration, “The fag is fine, thanks for asking.” Empowered but saddened, he’s terrified by the rage and the violence within himself, but also relieved to have found that well of courage.

Having been there and done something similar – I punched my elementary school bully in the face, during class, while the teacher nodded his approval – I immediately identified with that confusing mix of feelings, along with that sense of impending freedom.

That turns out to be the first change or revelation of many, but it takes the loss of Skye’s mother to bring about the most significant change in a young man’s life, bringing a family back together and opening a new chapter on happiness. It is also one of the most touching aspects of the book, with a heartfelt letter of acceptance from an estranged father.

In between, of course, we have a story of drag. Fascinating, but something a young man did not understand much about, it initially promises fun and freedom, but comes to represent something more. It is not about “a sexual attraction to the feminine side of drag,” but about taking on a persona and becoming whomever or whatever he wanted to be. As Skye puts it, it is about, “disguising all the pain and resentment from the past.”

With over 20 years of media experience under her belt, Skye has compiled an impressive resume. She’s a radio host and a TV presenter, and a prominent feature of promotional campaigns for such big name companies as Virgin Australia Airlines, Ascot Quays International Hotels & Resorts, and VOK Beverages Australia.

Skye High is not just a face or a persona, however, she is also a voice – and one that is as passionate about bullying and homophobia as human rights and mental health. The Global Think Twice initiative is a values-based, awareness and educational initiative that believes we all play a part in addressing the issues of bullying, suicide and violence. As an ambassador and one of the initiative’s shining lights, Skye’s focus is quite natural on homophobia and bullying.

Having gone from From Darkness to Diva herself, Skye is equally committed to helping others find their way out of their own darkness.