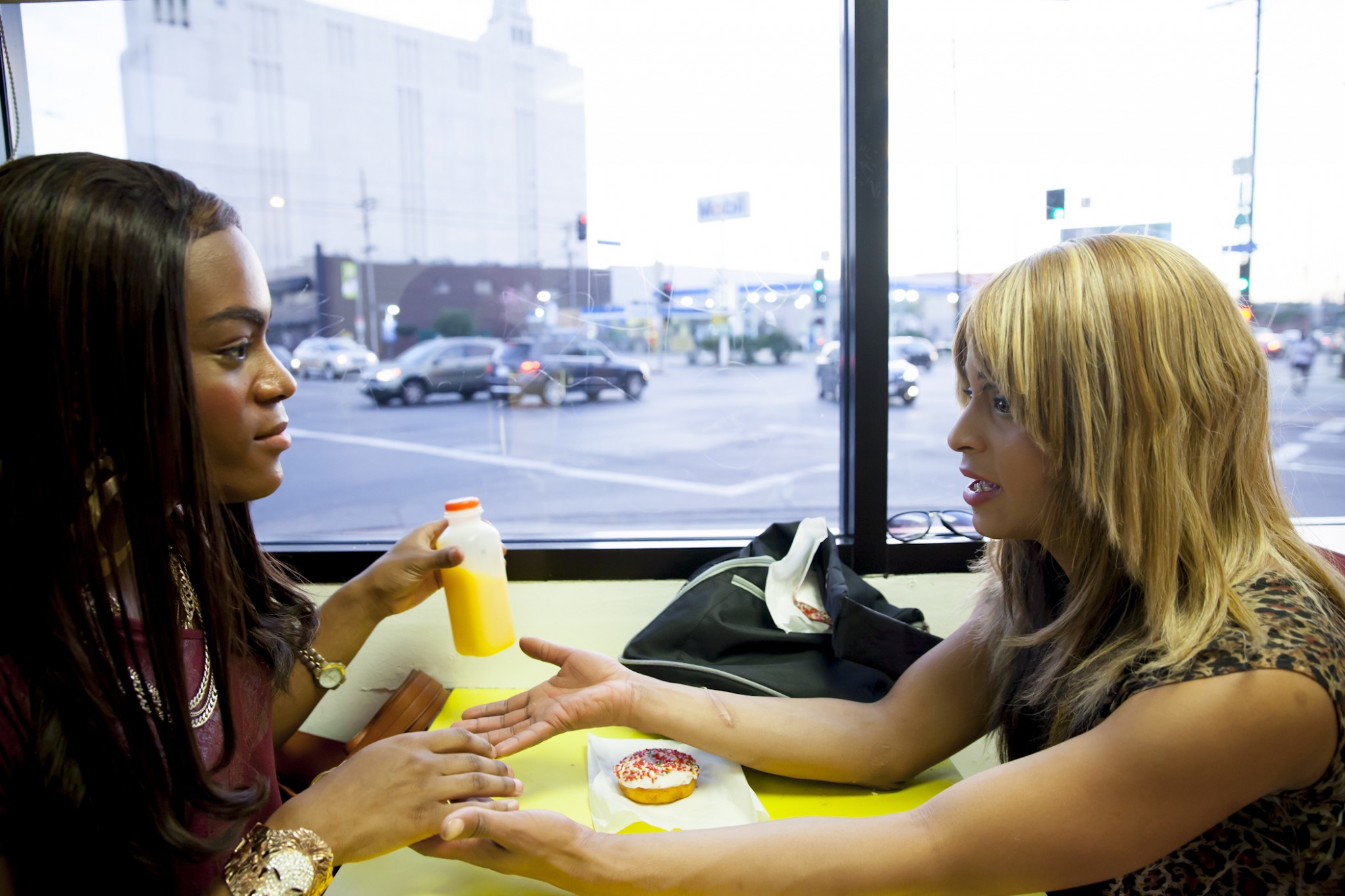 Director Sean Baker’s new, low budget comedy/drama ‘Tangerine’ is a titan clash of cultures which is acted out on the sun-baked streets of Los Angeles.  Don’t worry about the fact that the film was entirely shot with Apple iPhone 5s cameras, because if I didn’t tell you, you wouldn’t know the difference.

Baker’s story is a Christmas tale; or maybe it is just a tale that takes place on Christmas Eve, which really doesn’t matter — it is equally hilarious and melancholy, in either scenario. The movie starts out with our two protagonists.  Sin-Dee Rella (Kiki Kitana Rodriguez) and Alexandra (Mya Taylor), two transgender male-to-female prostitutes, chilling out in a donut shop.  We find out that Sin-Dee has recently been released from a 28 day stay in prison and is eager to hook up with her boyfriend/pimp Chester (James Ransone – Old Boy, Sinister 2). When Alexandra tells Sin-Dee that Chester has been stepping out with a “fish” (a derogatory term for a biological female) while she has been in jail, Miss Dee goes bonkers and off she goes bent on a mission of revenge.

After Alexandra tries to calm down Sin-Dee, to no avail, the two split up and traverse the streets of L.A. on different paths: Sin-Dee on track to hunt down the two timing “bitch,” and Alexandra back to work for a trick or two — and then to a dumpy nightclub where she sings. Sin-Dee does a little detective work on the streets and eventually cheapest generic levitra finds her target, Dinah (Mickey O’Hagen), in a flea bag hotel which doubles as a hooker’s headquarters. In the laugh out loud scene, Sin-Dee burst into the room and grabs Dinah by the hair, pulling her out while various forms of john-based debauchery are taking place.

Now that Sin-Dee has found her cheat, she must find her accomplice, Chester; but not before taking the time out to see Alexandra’s performance at a sleazy lounge where Alexandra actually pays the manager to let her sing ‘Toyland’.  Too funny!

Now back to the story.  While all of this is going on, we have a sub-plot which involves an Armenian cab driver named Razmik (Karren Karagulian), who when not servicing customers, services transgender hookers. When Razmik ducks out on the family Christmas Eve party by claiming that he needs to work, his wife’s mother suspects that he is out cheating and trails him in another cab.

All of the principles are now destined to meet up in a knockdown, drag out, riotous free for all finale, which takes place in the same donut shop where it all started; and which is refereed by an Asian proprietor appropriately named Mamason.

Most of the dialog is very fast and funny and first time actors Rodriguez and Taylor are wonderful (Taylor and Rodriguez were actual sex workers and friends in real life).  Sean Baker, screenplay writer Chris Bergoch, Taylor and Rodriguez did extensive research for the movie using several transgender prostitutes from the area as advisers.

This is a test sidebar
This website uses cookies to improve your experience. Your continued use of this site implies that you are okay with this.OkNo