A Chat about Chat Sites 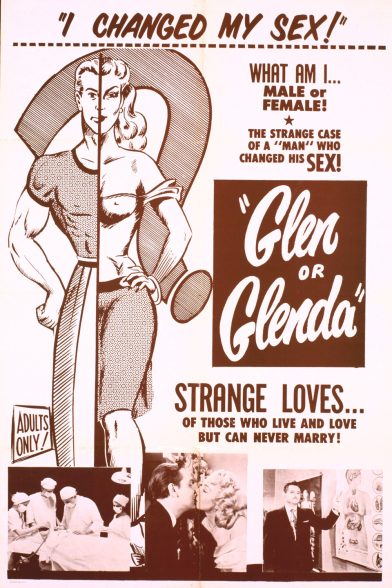 There is a classic 1953 movie on crossdressing entitled ‘Glen or Glenda’, by American Director Ed Wood. It’s a must see for anyone interested in nineteen fifties crossdressing.  It touches on suicide, psychiatric descriptions of transvestites, the awkwardness of buying female clothes, plus fetishes and perversion.

The star is a closet crossdresser who wrestles with the problem of whether to tell his girlfriend that he dresses. It is an Ed Wood classic as it ends happily when the girlfriend willingly hands over her angora jumper to her now liberated crossdressing boyfriend. Ed Wood was well known for making rotten movies but this film stands out as a valid attempt to depict the times he lived in.

At no time in this film is there a mention of any sexual activity with another Transgender person. The star only meets with another crossdresser. This actor sits comfortably at home in a frock smoking his pipe, discussing the leading actor’s dilemma in how to tell his girlfriend that he is a crossdresser. Everything is harmless with no hint of any attraction of the man in a frock to another man.

Another common fact is that one of the biggest users of Transgender chat sites is the male admirer. There are not many Tgirls who have not encountered the male admirer on line. While the majority of male admirers offer no offence, a minority pester Trans people for sex. The talk normally opens with, “Hi my name is blabla would you like to see my cam?” The open cam inevitably has a male naked body with the inevitable erect private member. If you refuse to chat or watch, there is often the crude response.

As this pestering happens to genetic females also, maybe it is asking too much of male admirers to stop pestering Trans people who may look exactly like genuine females. On some Transgender sites the male admirers often outnumber Transgender members. Many of these admirers declare openly their preference for Transgender females as they try to chat up and arrange meetings with Tgirls for sex.

Another fact is that online chat sites do attract Tgirls who are attracted to men only. You only have to read the chat to find the girls who like sex with men or enjoy teasing the male admirer. Their profiles also stipulate their preferences for men. These active girls can dominate sites as they have many followers among the male admirers who are vocal.

This made me think that the natural progression from male to female could result in a desire to experience sex as a woman with a protective male. A large number of Tgirls who pass as female have gender reassignment surgery in order to have sex as a female. Many have found the right male lover and refuse to have any sexual relations with any other Tgirl as they have found their ultimate partner. This fact happened long before online sites appeared so it could be argued that for large numbers living with a man as a genetic woman is a natural progression of the Transgender journey from male to female.

Other sites seem to offer the Transgender girl a chance to show her pics and videos. Once a girl has loaded her material online, the site adds pornographic downloads of professional Tgirls having sex with men in continuous feeds of GIFs and cams with links to more pornographic oriented web pages with even more links to paid pornographic sites.

In summary, the main issue here is that any newcomer to the Transgender online world has to work through many minefields. Gone are the days of Ed Wood’s movie when Transgender people met to innocently discuss fashion or problems with passing as female. An innocent meeting can turn into something totally different today.