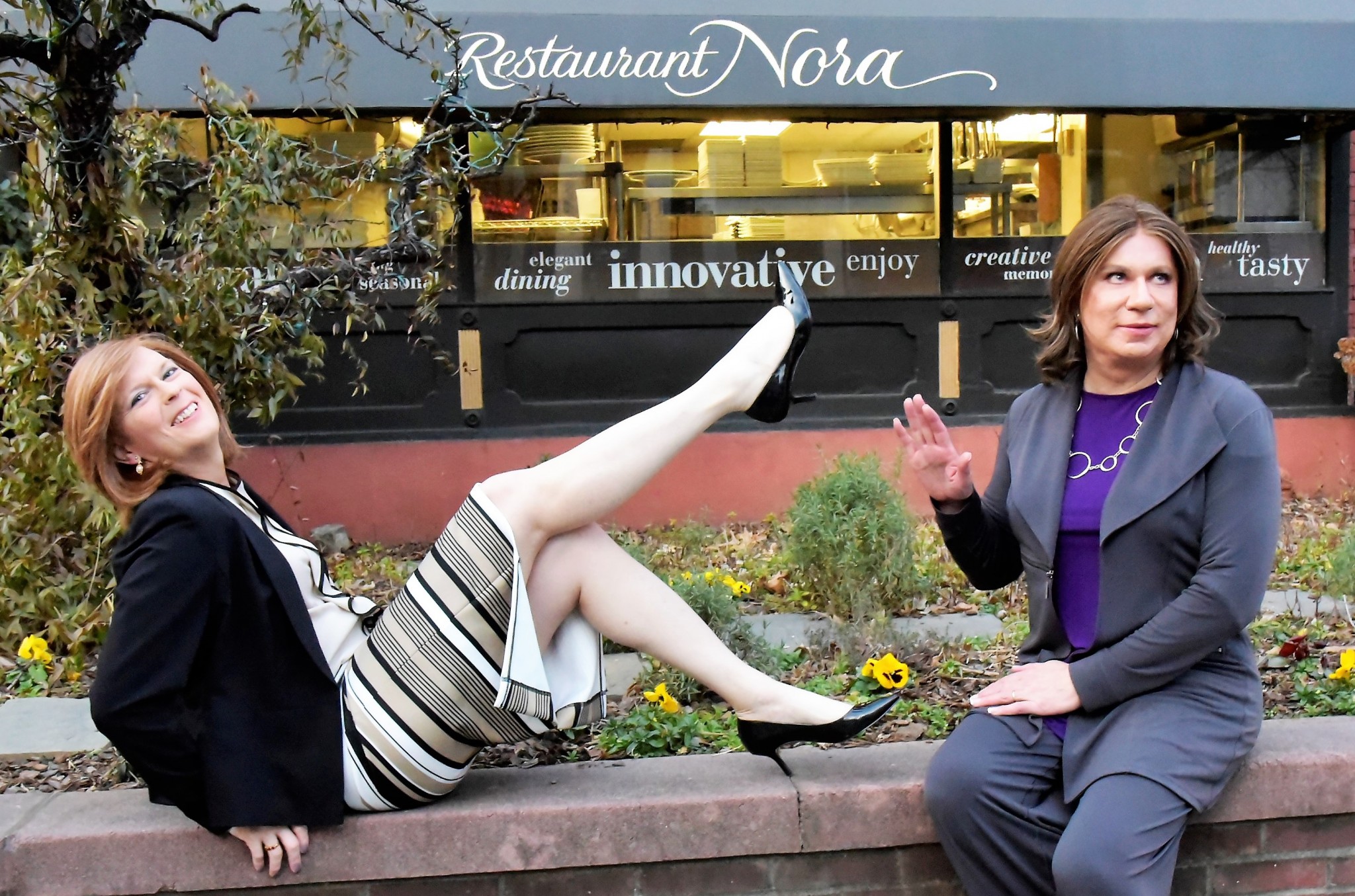 Chicks of a Feather, Frock Together – Kimberly Moore – Where Is She Now?

I caught up with Frock Chick Kimberly Moore (who appeared in the February/March issue of Frock back in 2015) in Washington, DC recently and thought readers would like an update. 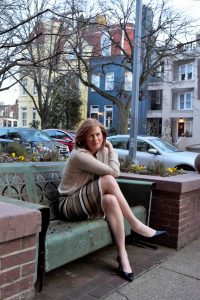 Our paths crossed virtually at the end of 2016. At that time we both had color and style analyses performed by Dr. Lynn Glassman, the ‘Doctor of Dress’. You can read more about our experience here.

Kimberly and I met for dinner on an unseasonably warm February weeknight. Before entering the restaurant, the normally shy Kimberly posed for photos during photography’s golden hour before sunset.  The photos for this article are from that meeting. 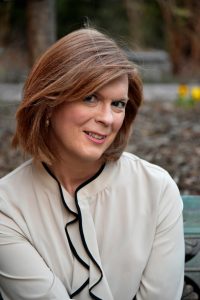 First Impression: She looked terrific! Kimberly demonstrated appropriate fashion sense with a conservative neutral toned skirt and blouse ensemble. Her sensible shoes and appropriate jewelry ensured she looked the part of a business manager or government executive professional. She looked like another lady meeting friends after a day at the office. It turns out, this was true! She drove an hour from her job through rush hour Washington, DC traffic to join. I had not seen Kimberly in about a year and honestly, I did not recognize her at first. Who was this pretty woman making direct eye contact while walking straight towards me at our designated meeting spot? 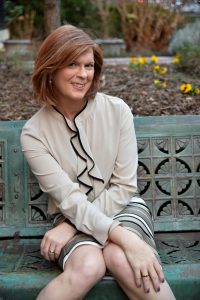 The second thing I noticed about Kimberly was her confidence. This is a woman who was totally comfortable and natural in how she related to the world. Beyond her previously noted ladylike appearance; her gait, mannerisms, and voice – everything about her was unquestionably female. Her smile betrayed the fact that she knew it.

Perhaps a holdover characteristic from her time in the Marine Corps, Kimberly also instilled confidence in me. She immediately made me feel like I could do anything. Is it possible that you can take the girl out of the Corps but you cannot take the Corps out of the girl?  Seems so. 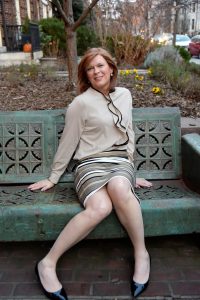 Dinner together was the capstone to a day out and about sightseeing in Washington, DC with pretty crossdresser friend Alexandra Forbes and makeover artist Elizabeth Taylor. In fact, the photos for this update article were taken by Elizabeth and are shared with her and Kimberly’s permission.

After taking in the monuments, the White House, the Supreme Court building and more, in heels, I was footsore and exhausted. However, upon seeing Kimberly my confidence as previously stated, and also my energy and enthusiasm rebounded. I was good to go! That, I believe, is the effect Kimberly has on everyone who comes within her circle. She lights up the scene and inspires others. This is incredible given all she has to deal with at the time of this writing. 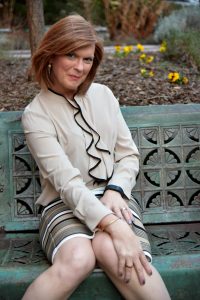 Readers can find shared details on Kimberly’s life at her Facebook site. To sum it up – many aspects of her life are in motion compared to when her original Frock Chick article was published a few years ago. Negotiating new relationships with family, friends, and coworkers while undergoing/experiencing gender transition cannot be easy. However Kimberly seemed committed to serious exploration. She’s cautiously addressing anticipated and surprising challenges her path serves up and is definitely not blindly rushing forward into transition. She says she lives about 80% of the time as Kimberly and is easing forward only as it feels natural.

Fortunately, Kimberly has friends and supporters – a lot of them. It’s not unusual for her Facebook postings about life happenings to receive dozens, if not hundreds, of encouraging positive comments. She also collects huge numbers of “likes” usually expressed in the shape of a heart. She still finds time to invest in her friends, like having dinner out with me, Alex and Elizabeth. 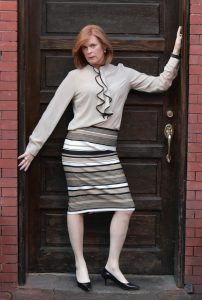 When she can, Kimberly takes steps to advance her interest in professional modeling. From these few images, readers can see how photogenic Kimberly is. Fashion or lifestyle modeling could be a real opportunity for her is seems. Let’s hope so. According to Elizabeth, whose photos were featured in Kimberly’s original Frock Chick article, “Kimberly was interested in modeling at the time and the Frock magazine article exposure confirmed to me she had great potential.” For those who are interested in retaining her services as a model, Kimberly reports keeping a small portfolio of images available at Model Mayhem. See www.modelmayhem.com and information about Elizabeth’s services can be found at   https://makeoverswithelizabethtaylor.com/. 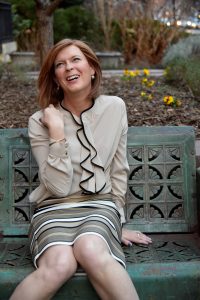 Kimberly continues to volunteer, helping impactful causes, usually in a leadership role. One example is the Transgender American Veterans Association (TAVA) where she serves as a Board Member at Large.

To round out her busy calendar, Kimberly is an active and widely admired member of The Vanity Club, the oldest and most accomplished sorority of transgender women in the world.

I asked Kimberly what impact, if any, being a Frock Chick had on her life. Her answer was “Being a Frock Chick was such a confidence boost. It was my first magazine and allowed me to believe that not only did others see me as I saw myself, but that I could inspire by being ‘real’.”
As one who was inspired by Kimberly’s Frock Chick profile, I agree! 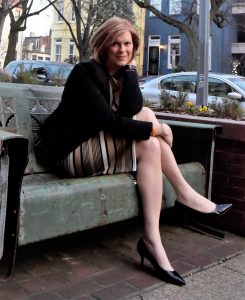 As a closing note to this update, it’s fair to acknowledge how giving Kimberly is to others, notably other Transwomen. I mentioned how supportive her numerous Facebook friends were, but readers should know that Kimberly gives those friends much needed support too. In fact, in 2016, Kimberly was the most frequent commenter on my Facebook and Flickr postings. Her  messages are always unique and special.  Clearly Kimberly Moore is not just another pretty Transwoman. She is on a progressive path of change to make her life and the lives of others better. We wish her the best in her pursuit of this worthy mission.