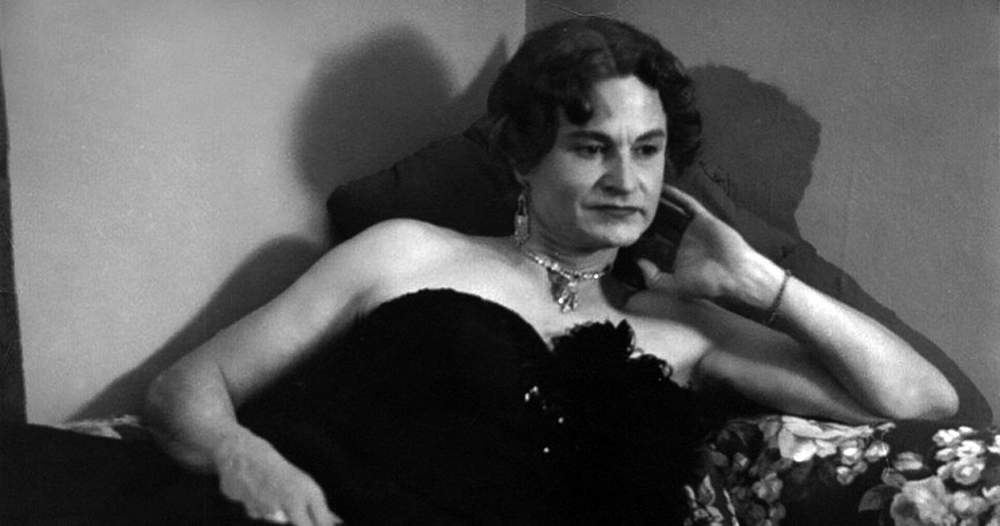 Virginia Prince (1912-2009) was a transgender advocate and a founder of transvestites’ rights in a time when ignorance prevailed.  Many crossdressing clubs and magazines owe their origin to her work.

Virginia Prince was a product of her age, a time when it was a criminal offence to dress in the clothes of the opposite sex.  In America, following the civil war, cities adopted anti-masking laws to prevent criminals escaping justice dressed as women.  Over sixty major American cities adopted these laws, and they stayed on the statute books until the nineteen-seventies.

Virginia Prince was an academic and she was familiar with the psychological arguments of her day which often regarded crossdressers and transvestites as perverted and deviant.  To counter this ignorance she helped to spread knowledge about heterosexual crossdressing and transvestism.

Virginia Prince was born Andrew Lowman in Los Angeles California in November 1912, to a middle-class family.  He started dressing in his mother’s clothes at the age of twelve.  At age thirty, Prince was working through an Oedipus complex with his psychiatrist.  It was then that the psychiatrist told Prince that his crossdressing was shared by others.

Prince graduated with a Doctorate in pharmacology from the University of California in 1939 and married for the first time in 1941, divorcing by 1948, citing his transvestism as the reason for divorce.  Prince’s crossdressing appeared in reports of the divorce case in the Los Angeles Times, which led other crossdressers to seek her out.  She also began using the name Virginia Prince among her new network. 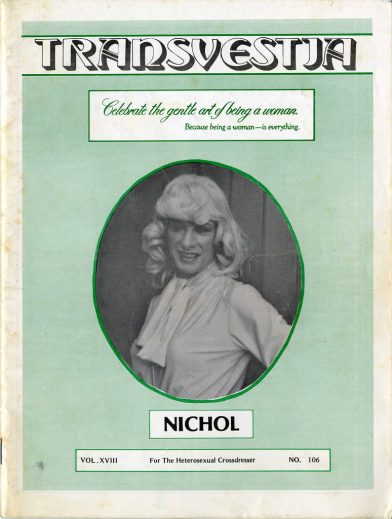 Networking and the dissemination of knowledge and information were Prince’s strengths. In 1960 she combined with twenty-five supporters to produce the magazine, Transvestia. This was published by Prince’s chevalier productions.  As editor of the magazine until 1979, she spread theories on crossdressing to readers.  One early word she created was femmiphellia (FP) or love of the feminine.  She used this word in preference to transvestite when speaking about herself.

This pioneering magazine also encouraged readers to submit their stories and promoted sales of her books on crossdressing. For many crossdressers living alone with order levitra their secret, this helped to overcome levels of guilt, ignorance and secrecy surrounding crossdressers in the fifties. Prince made it clear that the Transvestia magazine was aimed at the heterosexual crossdresser, who often followed societal norms of wife and children, while also exploring his feminine side.

As an intellectual she followed Doctor Alfred Kinsey’s studies of transvestism in the forties. Kinsey was known as Doctor Sex in his day and he worked closely with Prince to make sex reformers and social reformers aware of transgender issues, before Kinsey’s death in the mid-fifties.

In the sixties, she formed the hose and heels club.  Security was tight for hose and heels, with each attendee always carrying two bags – one with their lunch and one with hose and heels.  Meetings always started with members eating their lunch.  On the words, “Now we have to eat the contents of the second bag”, from Virginia, the members opened the second bag.  If the heels fitted, each member knew that the meeting place was not infiltrated by the FBI or police.

Prince was active in forming crossdressing groups in the United States and worldwide.  Hose and heels went on to become the, Foundation for Full Personality Expression (FPE) in 1962, with a magazine known as the Femme Mirror.  One thing to note is that homosexuals and transsexuals were excluded from her clubs.  A European group based on her club was formed in London, UK and called the Beaumont Society in the mid-sixties.

Prince was arrested at about that time for sending copies of Transvestia through the mail system.  She avoided trial and accepted a probation sentence which effectively meant she could be re-arrested if she crossdressed again within five years.  Her attorney avoided this problem for Prince by persuading the court that Prince could help educate the public through media presentations which she would  present dressed as a woman.  This was when her crossdressing advocacy took off.

By 1968 her second marriage dissolved and she began living full time as a woman.  She undertook hormone treatment to grow breasts and eliminated her beard through electrolysis to become a woman.

On an intellectual level, Prince was a friend of Harry Benjamin.  Benjamin created the sex orientation scale which broke transvestites and transsexuals into seven levels, following Alfred Kinsey’s work on sexual levels.  Benjamin advocated the use of these levels as a method of deciding who should have sex change surgery.  Unlike Benjamin, Prince opposed sex re-assignment surgery.

In Prince’s opinion a person’s sex was defined by nature while gender was formed by society. So, to oppose the laws of nature would make them a freak and a mistake.  Her own words on the matter were “Sex re-assignment surgery is a communicable disease”.  She believed that many were talked into sex re-assignment surgery as an answer to their psychological problems.  Regarding her own motives in changing gender she stated that she changed her gender but not her sex and classified herself under the new word ‘transgenderist’, which is often attributed to her.  It was Prince’s arguments against sex change which fostered much of the bitterness in the transsexual community.

Regardless of the controversy surrounding Prince, she deserves her place in transgender history.  Many learned that they were not alone through her magazines.  It is this knowledge that we are all part of a larger community that gives us the rights we have now which are far different to the rights in existence when Prince began her pioneering work.