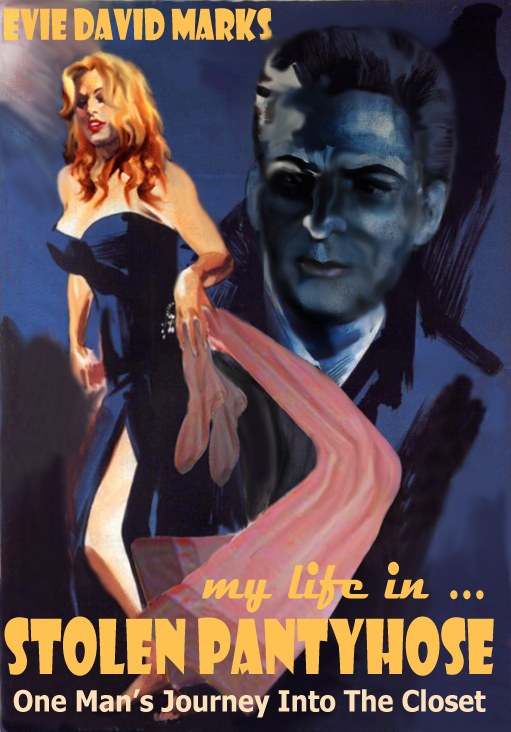 My Life In Stolen Pantyhose 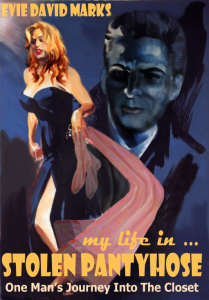 For the most part, David Marks is your typical husband and father. Were you to walk by him on the street, stand next to him on the train, or even sit next to him in the office, you’d assume him to be just like any other man. He’s handsome, well-dressed, professional, and well-spoken. David is the kind of man who possesses the personality and quick wit needed to step into some of the largest companies around the world and consult on their business needs.

It’s during those travels, however, that David’s hidden side emerges. Surrounded by the comfort and relative anonymity of a strange hotel room, he opens that extra suitcase he always carries with him, withdraws his tools of transformation . . . and becomes Evie.

What’s interesting about David’s story is the way in which that hidden life evolves. It starts as part-time, private exploration, restricted to parading around the hotel room (and, in his most daring moments, the hallway). Before long, however, he’s daring to step out en femme to attend the local transgender support groups – efforts which often involve a comic series of delays, missed connections, and last-minute changes in plans. Eventually, we find a far more confident and adventurous Evie arranging extramarital liaisons and exploring her feminine sexuality.

Like David/Evie herself, the story definitely has two sides . . . two faces . . . two personalities. On the one side, there’s raw honesty, frank discussions of sexuality, and admissions of guilt. David doesn’t let us forget that he’s a married man, exploring Evie against his wife’s levitra online pharmacy wishes, and stepping further and further across the bounds of that relationship. It makes for some uncomfortable moments in reading but, to his credit, David doesn’t try to justify the behaviour or excuse his actions. As first impressions go, his wife doesn’t come across particularly well in the story, but the tension and frustration there are understandable.

On the other side, Evie indulges us in a lot of little fantasies, both paranoid and fanciful, which are a very nice touch. Those asides provide some much-needed moments of lightness and levity, providing something special and unique even as they help the reader connect with the growing divide between David and Evie. It’s easy to place yourself in those real world situations, and fun to let your imagination run wild, to wonder how much alike your actions and reactions might be. Those moments are as much a coping mechanism for Evie as they are a portal to her fears and insecurities, and they really help to reconcile us to the truth of who David/Evie really is.

My Life In Stolen Pantyhose is a surprisingly long tale, especially compared to the flood of self-published memoirs over the past few years, but it flows along very smoothly. Having gotten a chance to know Evie a bit, I wish there was something of an epilogue to help readers understand her next chapter, but it’s definitely a story you’ll come away from with a little hope and understanding.